We also have a fixed Vehicle Activated Sign (VAS) located on the A51 at Priory Gardens (facing south towards The Chetwode) and the information from this is located above under Priory Gardens. We are able to publish this only as often as SC forward updated information to us, which we do as soon as it's received. There is also now a VAS on the A525 Newcastle Road entrance to Woore. Figures for both were at last been received (July 2019) but needed some editing before publication, for ease of reading. Shropshire Council has provided nothing since then!

The Priory Gardens figures have now been published, but Newcastle Road's are sadly faulty - only 165 vehicles recorded in 5 months! The file is available by email on request but has not been published, for obvious reasons.

Analysis of the figures from the fortnightly data of our own MVAS located A51 at Woore School , a 30mph zone.

Yet again this shows numerous vehicles exceeding the 30 mph limit by 30 mph i.e. over 60, with one vehicle at 72mph.

Unfortunately Road Safety Data still seems to be a low priority for Shropshire Council as they have still not provided fresh data for the VAS’s installed by them.

Below this is a graph and below that dates and times.

If you left click (depending on set-up) anywhere within the box it will highlight the box. You can then “hover” over any point on the graph which will then give further information i.e. day, hour and speed.

·         Chart, which you’re already in and immediately below that

·         Table. This gives average information on an hourly basis

·         Table again, under Raw Data, this gives every activation and often runs into the 100s of thousands as vehicles are “Tracked” and will activate the device more than once.

As the mid-March 2017 readings showed two vehicles exceeding 90mph that month we did some further analysis, and the story was picked up by the local press (below):

This story received further coverage in the local press:

One of the MVAS signs in operation 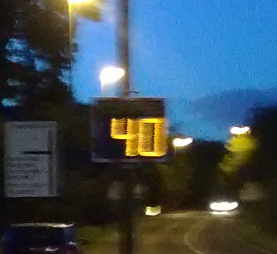